I’m beaming with pride today. My brother, Benjamin, published his first first-authored peer-reviewed journal article in Nature. It’s gotten a lot of feature articles already in the mainstream press and has huge implications for climate change policy and fossil fuels; the equivalent of a grand slam at one’s first at-bat.

Essentially, my brother’s team conducted campaigns in Greenland to measure the amount of radiocarbon (14-C) from 1750 to present time by drilling ice cores. The measurements are extremely difficult; each data point requires melting hundreds of pounds of ice only to collect a small amount of trapped air, which itself contains a truly miniscule amount of CH4, and only a portion of that is the radiocarbon isotope!

Here’s a pic of the lab setup. The general process is: freeze out unwanted gases. Burn CO to CO2. Freeze that desired CO2, distill twice & Cryo-focus, then flameseal. CH4 carries on across the lab, to later repeat for this gas! (Credit – Peter Neff) 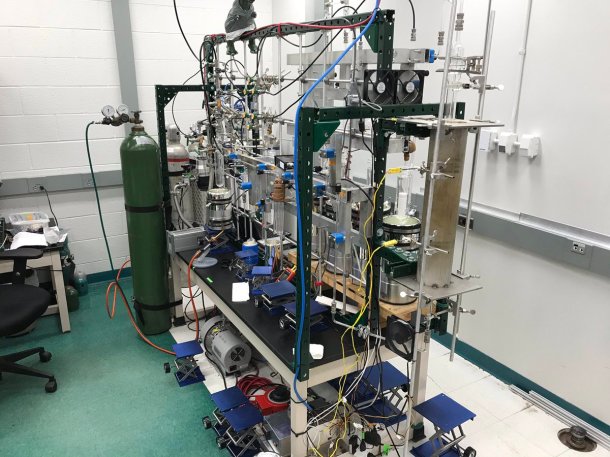 The research question they were trying to address was essentially, “How much of the methane (a strong contributor to the greenhouse effect) in the atmosphere, comes from anthropogenic sources, i.e., the oil and gas industry, and are our current estimates of natural methane sources correct?” From the Nat Geo article:

Previously, geologic sources like volcanic seeps and gassy mud pots were thought to spit out about 10 percent of the methane that ended up in the atmosphere each year. But new research, published this week in Nature, suggests that natural geologic sources make up a much smaller fraction of the methane in today’s atmosphere. Instead, the researchers say, that methane is most likely attributable to industry. Added up, the results indicate we’ve underestimated the methane impacts of fossil fuel extraction by up to 40 percent.

I’m collecting some news coverage from around the world relating to it:

Reddit r/science thread (linking to The Guardian; at 5th item on the subreddit’s front page at time of writing this note)